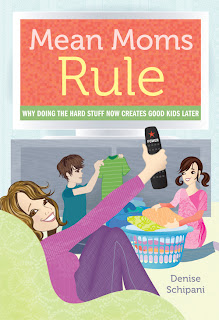 Spoiling kids is out; Mean Mom is in.

The cultural backlash against permissive parenting is now in full-stride (witness the New Yorker article, "Spoiled Rotten," Business Insider's, "Cities with The Most Spoiled Children," and ABC's "How Not to Spoil Your Child"), and Mean Mom Denise Schipani is surfing the tidal wave of parental angst. Schipani, a fellow freelance writer, published her first book, Mean Moms Rule earlier this year and has been in demand ever since. Today, for instance, she appeared on CBS New York to discuss her common-sense approach to parenting. Now, she shares her thoughts on raising boys here at Blogging 'Bout Boys.

I asked Denise to reflect on her Mean Mom approach, cultural stereotypes and parenting boys.

Well, as boys are all I have (we have two sons, 7 and 9), it’s hard for me to say if my take would be different with girls, but I don’t think so, not in the broad strokes. My approach is about raising the next generation of men, and women, as independent, capable, respectful, honest people. And I called my approach – which entails saying “no” without apology; trusting my instincts and not basing my parenting decisions on what everyone else is doing; teaching kids life skills; and letting my kids own their failures as well as their successes – “mean” because it can be tough to do all the time, in a permissive culture like ours.

What do you think of the saying “boys will be boys?”

Is it too easy to just leave it at: “I loathe it”? Not enough? Okay, I’ll say more! Boys won’t be “boys”; they’ll be the people that they are. And I put “boys” in quotes because when people use that phrase, they mean “boys” are reckless, or messy, or impolite, or not as smart as girls, or not responsible for their actions. That’s not how all boys, or all men, or all people are. “Boys will be boys” ends up being a blanket excuse for poor behavior, and I’m not fond of excusing behavior!
On the relatively lighter side, “boys will be boys” leads to unimaginative, reductive characters in commercials or sitcoms (usually husbands /dads) who are too stupid to know how to run a washing machine, take care of a child, cook anything, or keep their dirty feet off the coffee table, you know? On the darker side, “boys will be boys” excuses things like date rape and other, less extreme forms of disrespect for others.
So, yeah. I loathe it.

What’s your greatest challenge when it comes to raising boys?

Battling the idea that because they are boys, they will emotionally leave me, in a way that (I am told, over and over) girls don’t.  It’s an old cliché; something like, sons are yours till they take a wife, daughters are yours for the rest of your life. First of all, gag! But second of all, there’s the problem that lies beneath it, which is that we’re supposed to raise boys to leave us, and girls to stick close by. Neither of those seem like great options to me. It’s sad to think we have pressure to push boys to grow up and be “the man of the house” sooner than they need to. I’m under no illusion that my boys will want to hold my hand in public all that much longer (though my 9-year-old will, now, more readily than his little brother, whom I’m not even allowed to kiss in private; I do it when he’s asleep). And as much as I’m actively raising them to be independent men who want to move out and create their own homes and lives, that doesn’t mean we can’t be emotionally close, no matter where they end up, or with whom. (A psychic told me, at a party, that I’d have close relationships with my daughters-in-law, in part because my sons would pick partners who reminded them of me, which is one of the greatest compliments I could get!).

What do you like the most about parenting boys?

They are, for the most part, pretty straightforward – they are who they are and they say what they feel and what they want. Then again, I don’t like to stereotype. I was talking to a mom who has a daughter the same age as my older son, and was laughing at how dramatic her daughter naturally was, with everything. And she said, “see what you miss, having boys?!” I laughed, too, but to be honest, my boys can be pretty dramatic too. And they can be very emotional.
But there is this: my sons are not in competition with me as a female in the house, which is kind of nice. There’s a psychological/developmental basis to this, and I believe it: in order for girls to become women, they have to model themselves after, or actively reject, who their mother is. Same goes for boys and their dads. That can involve competition and battles that I don’t see having with my sons, at least not as much as I had with my mother!
Also, they are very easy to get ready for special occasions. It’s, “Here, put this belt on” and, “do you want gel in your hair, or not?”, and we’re all set. I don’t have to share my flat iron, either.

Boys today face a lot of pressure to be “cool” and “tough.” How do you help your boys deal with those pressures?

I think if I did see that happening with my kids, which so far I haven’t (my older son is fairly clueless about this stuff, thankfully; my younger son has been blessed by being a combination of pretty happy-go-lucky and also quite popular with his peers), I’d see it quickly, because it would be inauthentic, and I’d call them on it.
Plenty of parents of boys don’t, which probably doesn’t surprise you or your readers. In large part, when boys start playing the tough guy, they’re trying in a new role, testing it like a pair of shoes to see if it fits. And their parent can either call him on it, gently, showing him that his actions are inauthentic (“that’s not who you are! That’s not how we treat people!”); or they can ignore it or subtly (and sometimes not so subtly) encourage it. Just take a look at some parents – moms and dads – on sports sidelines. No one wants their child to be a loser or a geek or to be unpopular, but I’d rather my child be his authentic self. To be honest, there are times I wish my older son were “tougher,” because I sometimes think he’d move more easily through life that way, but then he wouldn’t be him. 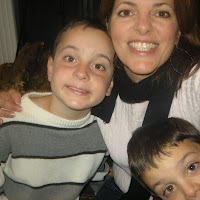 Denise Schipani is the mother of two boys, and the author of Mean Moms Rule: Why Doing the Hard Stuff Now Creates Good Kids Later (Sourcebooks). She blogs at MeanMoms Rule.
Posted by Jennifer Fink at 1:09 PM