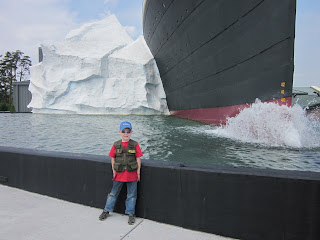 You know about our camping trip. But did you know that it all started with the Titanic?

My 6-year-old son is a Titanic fanatic. He first got interested in the Titanic about a year ago, after we picked up a book about the famous wreck at a local garage sale. He poured over that book, passionately, so we went to the library and checked out more books. And videos. Today, my son has darn close to 10 books on the Titanic, and he can tell you almost anything about the ship and its discovery.

But of course, my son has never been on the Titanic. He doesn't even remember the visit our family made to a traveling Titanic exhibit at the Milwaukee Public Museum a few years ago. This year, though, marks 100 years since the Titanic's sinking, so I jumped online, hoping to find a similar exhibit within easy driving distance.

What I found instead was the Titanic Museum Attraction, a special Titanic-only museum featuring a reproduction of the Grand Staircase! I was immediately intrigued. I knew my son would love it and I -- well, I wanted to see the Grand Staircase for myself.

The only problem was that the Titanic Museum wasn't anywhere near our house. The two locations -- Branson, Missouri and Pigeon Forge, Tennessee -- are both a good distance from our home in southeastern Wisconsin. But I really wanted to take my son. So I started calculating mileage and locating interesting stops along the way, and came up with our Titanic-by-way-of-the-Indiana-Dunes-and-Mammoth-Cave vacation.

We first glimpsed the Titanic Museum as we were passing through Pigeon Forge on the way to our campground in the Great Smoky Mountain National Park. We'd been driving for hours and hours when suddenly we saw the great ship itself materialize along the right side of the road. That sight alone -- a real, full-size version of the Titanic (albeit, only her front half) -- was enough to thrill my son. 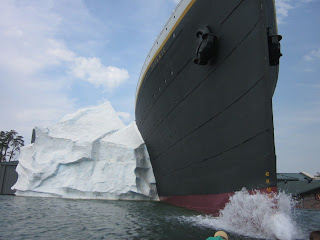 We returned the next day for our official tour. Each of us was given a boarding pass which included the name and background info of an actual passenger aboard the Titanic. My 6-yr-old recognized "his" name -- Dick Williams -- almost immediately. (A few months earlier, we'd read an article about Williams, a tennis star who survived the sinking.) The rest of us speculated about our fates, which would be revealed at the end of our tour. (Spoiler alert: Most of us survived.)

We wandered through the exhibits, which included diagrams and models of the Titanic, maps of her voyage and actual and recreated artifacts from the famous ship. We listened to a Captain Smith look-alike tell us about her voyage. And we loved the actual-size reproductions that made us feel as if we'd snuck onto the ship. We saw a full-size third-class stateroom, complete with two sets of bunk beds. We pressed a button and saw water flood a staircase; we were safely behind a pane of thick glass, but the experience nonetheless gave us an idea of how terrifying it must have felt to stand in the path of such water.

The boys enjoyed shoveling coal into the furnace. The pre-weighted shovel gave them some idea of the physicality of this task, and the signs nearby put the back-breaking labor into perspective: stokers shoveled coal in 10 hour shifts, around the clock, to keep the Titanic fueled.

The Grand Staircase was as beautiful as it looks in pictures -- but did you know that the surface of the stairs was not marble, but linoleum? (Back then, linoleum was the new, amazing thing.)

The best part, though, was the opportunity to experience 28 degree water firsthand. We knew, from our studies, that the water around the Titanic on the night of her sinking was just 28 degrees Farenheit, and that few people survived for more than a few minutes in such chilly water. But the Titanic Museum gave us the opportunity to dunk our hands into water chilled to 28 degrees. Until you've submerged your hand in 28 degree water, you can't really understand what the books say when they describe such cold as "like a thousand knives, stabbing you." I found it difficult to keep my hand in the water for even 15 seconds.

The kids (and I) also loved climbing on Titanic ship decks tilted to different angles to represent the angles of the decks at various points in her sinking. It's one thing to watch a movie of people sliding down the deck as the ship sank, and another to personally experience how hard it is to stand on ship that's going down.

The museum was a treasure trove of primary sources too, including photos and scrapbook pages taken by a priest onboard, postcards from passengers and authentic 1912 newspapers reporting the Titanic's demise. I was particularly moved by two telelgrams. One, sent from a boilerman (who was off-duty at the time of the sinking) to his family said simply, "Safe." (So much, in that one word!) Another, sent by the White Star Line to the wife of a passenger, said, "Regret your husband not saved." I'm willing to bet that tears were shed over that piece of paper.

My sons, of course, were not as enchanted with the primary documents as I was. I know they will never forget what 28 degree water feels like, though, and I know they now have a fuller understanding of the tragedy of the Titanic. 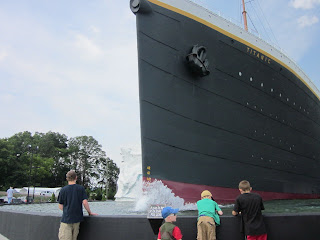 Disclosure: After seeing a previous blog post mentioning our planned trip to the Titanic Museum, museum personnel reached out and asked if I'd be interested in writing a blog post about our visit in exchange for free family admission. The boys and I received free admission and audio tours during our visit.