Getting Boys to Read

The topic -- boys' lack of interest in reading -- isn't a new one to readers of this blog. Neither is the solution, which is to "meet boys where they are" -- fancy psycho-speak for "capitalize on their interests." Boys, in general, respond to shorter bursts of non-fiction text. If the material is funny, all the better.

But boys, like all humans, are complex creatures, and their interests, believe it or not, do extend beyond fart jokes. My boys absolutely loved Captain Underpants, Walter the Farting Dog and Diary of a Wimpy Kid -- but they also enjoyed Hatchet, a Newbery Honor-winning novel. And Boy #1 just finished a book about German POW camps in Wisconsin.

My best boy-related reading advice? Keep a variety of reading materials around the house. Picture books, comic books, novels and non-fiction tomes are great, but so are magazines and newspapers. My oldest loves to thumb through our local paper; Boy #2 like to check out the headlines and photos on the Sunday sports page. They've become big magazine fans, a fact which cheers this magazine writer's heart. Current favorites include:

What magazines do your boys enjoy?
Posted by Jennifer Fink at 8:38 AM 12 comments:

I was playing in the sandbox with Boy #4 today when Boy #3 looked at me and asked, "What would you be doing right now if you didn't have kids?"

I shrugged. "Probably have lunch or working at my computer."

He nodded. "So your life would be more boring?"

There's been much talk on the Internet lately about parenting and happiness, much of it triggered by a New York article titled, "All Joy and No Fun." As the article states -- and as every single honest parent will tell you -- parenting is frequently messy and not much fun. I love my children to death, as they say, but they drive me crazy every single day. You think I like trying to teach four young boys how to sit at a table?

As frustrating and exhausting as parenting can be -- and as good as a quiet lunch and time to work sounds, especially in the middle of a hectic day -- I wouldn't change my life, because my kids have changed me.

Let that sink in for awhile. Then click over and read author Jennifer Lawler's extremely moving blog post, For Jessica. If you can, come back here and tell me what you think.
Posted by Jennifer Fink at 7:23 PM 3 comments:

Do you have a risk taker in your house? You know, one boy who insists on climbing to the top of the swingset, then jumping down? Or one who's always building the bike ramp higher and higher, pushing the limits of safety?

Where does he fall in birth order? Based on a new study, I'm going to guess he's not first.

According to a study published in Personality and Social Psychology Review, younger siblings are more likely to take risks. The authors reviewed Major League Baseball data (how's that for a cool data set?) and found that younger siblings are 10.6 times more likely to attempt to steal a base -- a risky behavior, at least in the game of baseball. Younger sibs are also more likely to be hit by a pitch, which the researchers believe may reflect a refusal to be intimidated. (Or to back down?) They also reviewed previous studies and found that later-birth order children are almost one-and-a-half time more likely to participate in a dangerous physical activity, such as football or skydiving.

My kids aren't old enough for skydiving, but based on limited experience, I'd say the study is right on. The climb-to-the-top-of-the-swingset example at the top of this blog post is cribbed directly from my life. Boy #3 first climbed the park swingset at age 5. By age 4, he was riding a bike without training wheels and skateboarding down the incline of my neighbor's driveway. My oldest son didn't even touch a skateboard until he was 8 or 9.

All three causes seem plausible, but I think the experts are missing one big one here: parental experience/benign neglect. With our first children, we tend to freak out over every. little. thing. If the Cheerio drops on the floor, we quickly whisk it away. If he approaches a skateboard at age 3, we redirect him to a more age-appropriate toy. But by the time there are two kids on the scene, we've learned to relax a bit. A combination of parental experience and lack of time (because, really, who can hover when there's a toddler and preschooler running around the house?) generally leads to a more relaxed style of parenting, a live-and-let-live attitude that gives kids the freedom to try things. Other parents freak out when my boys climb ever higher in the tree. This many kids into it, I trust them enough to let them try. I also, to tell you the truth, would rather spend my time chatting with other parents at the park than harping at my kids to stay out of the trees. See what I mean by benign neglect?

What about you? Are your younger boys more likely to take risks? Why (or why not)? 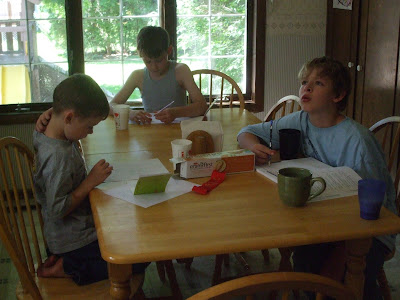 Our kids today live in an increasingly sexualized world. Disney darling Miley Cyrus morphs from Hannah Montana into a full-blown sexy singer, and while some of her young fans (and many of their parents) disprove of her new look and lyrics, she's traveling a well-worn path. Our stores and catalogs, after all, are filled with skimpy clothes aimed at pre-teen girls.

For the most part, I thought I'd been spared that angst. As a mother of four boys, I don't have to deal with Halloween costumes that barely cover their midriffs or short-shorts emblazoned with the word "Juicy." But as a recent blog post at Sociological Images pointed out, boys are not immune from sexualization.

Jayden Smith, the 11-year-old star of Karate Kid, is admired for his abs. Apparently, he's also a self-proclaimed "great kisser." More distubring than that, however, is the fact that almost no one seems disturbed by these facts. Would we accept and tolerate the same behavior and treatment of an 11-year-old girl?

I'll admit it: The fact that he had a girlfriend in the newest Karate Kid seemed a bit odd to me. In Karate Kid I, the protagonist was a high school student. Here, he's barely in middle school. But beyond that, I hadn't given any thought to the fact that maybe -- maybe -- we tolerate certain sexual images, behaviors and casting as OK for boys but not OK for girls.

Sociological Images also ran photos of 16-year-old Justin Bieber with 29-year-old Kim Kardashian. And while the photos don't seem particularly disturbing (at least not compared with the site of Miley Cyrus tramping around in next-to-nothing), the author brings up an excellent point: What if the roles were reversed? Would we accept such photos of a 16-year-old girl with a 29-year-old man? Why do we tolerate provocative photos of young boys with older women? Could it be that a double standard is still in place?

"We accept the idea of boys being sexual, or sexually interested, at younger ages than girls, and any interest they show in older girls or women is a sign of their sexual precocity..." writes gwen. Think about that. Sub-consciously, are our expecatations for our sons different from those for our daughters? Why?
Posted by Jennifer Fink at 9:18 AM 4 comments: 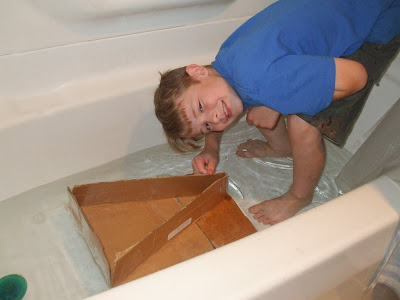