Guest Blog: From Freeways to Flip-Flops

I’m honored to be a guest blogger on “Blogging’Bout Boys.”

My name is Sonia Marsh and I write the blog Gutsy Writer. In 2004 we left our comfortable life in Orange County, California, and moved to an island in Belize. WHY? We had 3 reasons:

1. To rescue our 16-year-old son from some bad choices he’d made in high school.

3. To teach our kids gratitude instead of entitlement. We moved from a large 5 bedroom house, to a hut on stilts. We learned to live with less and to appreciate each other more. ( We stayed in Belize for one year.)

I’m currently working on my memoir: From Freeways to Flip-Flops, and would like to share an excerpt from the middle of Chapter One, when I started noticing defiance in my oldest son, Spencer. He was nine at the time, and his two younger brothers: Austin six, and Jordan, almost three. My husband’s name is Duke, and our rat terrier is Cookie. 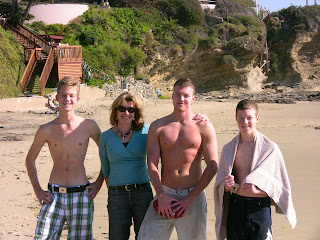 When Spencer turned nine, his assertiveness no longer seemed attractive. “Wake up Spencer,” I said placing my right hand on his back. Spencer remained flat on his stomach. “It’s time to get ready.”

I figured he’d get dressed in a minute, so I headed upstairs to wake Austin up for Kindergarten. I found him dressed, sitting on his bed struggling to turn his sock inside out. “Can I have waffles for breakfast?” he said.

During school days, I let Jordan sleep until it was time to strap him into the car seat. One less child to deal with, while the other two got ready for school.

Austin liked school. He was a morning person like Duke.

Austin followed me downstairs and I poured him a bowl of honey-nut cheerios. The TV was already on a cartoon channel with Spencer gripping the remote in his hand.

“Spencer, get dressed, we’re late.” I jogged down the hallway, opened his drawers and flung a set of clothes on his bed to speed up the process. “I expect you dressed by the time I get my shower,” I said. “Your cereal bowl’s on the counter.”

After my shower, I could hear Austin brushing his teeth. I headed back down and found Spencer, still in pajamas, wiggling his bare toes on the coffee table. “Why aren’t you dressed?” I asked in a firm tone.

“I’m not going to school,” he said with teenage attitude.

“Well then,” I said, trying to remain calm like they recommended in parenting magazines. “I guess you’ll have to explain to your principal why you’re wearing pajamas today.”

I grabbed the remote from his tight grip and turned off the TV. Spencer stared at me with such cruel eyes, that for one second, I hated him. How could my baby do this to me? He refused to get off the couch, and I felt Austin’s eyes peeking through the staircase railing, scared to come down, yet interested in the unfolding scene.

I yanked Spencer off the couch with both hands under his armpits, and started dragging along the floor backwards. He already weighed more than I could lift. He wrestled himself out of my grip and stampeded down the hallway and hid under his bed sheets. “Are you going to dress or not?”

Spencer didn’t move. I hauled him out of bed and towed him to my van. He tried negotiating a compromise which involved letting him skip school, but I refused. Spencer finally caved in and changed clothes, but not without shoving me into the van’s side mirror first.

Grabbing his wrists, I dug my short nails into his pulse points and stared straight into his angry eyes, “Don’t you ever do that again. Do you hear me?” He continued showing no remorse. An alarm went off inside me. If I can’t get him to respect me at nine, what will he be like at thirteen?
This prompted my first ever appointment with a therapist. Duke had a thing about therapy. He believed it was a waste of money, and that people should be capable of solving their own problems.

“Well I need advice from someone other than you,” I said. “Go ahead,” Duke said. “I’m not stopping you.”

I longed for reassurance from a professional, that all boys go through aggression at some point, and that as an early bloomer, Spencer started showing defiance sooner than most. Instead the therapist warned me, “Respect isn’t automatically given to you, it’s earned. You have to be more firm and consistent. You also need specific consequences with kids like him.” What did he mean, kids like him?

I didn’t understand why respect had to be earned by being firm. Why couldn’t it be earned through love and caring? That was how I’d learned to show respect towards my own mother and father.

Our life changed two months after Spencer turned thirteen. The day after Christmas, a large truck pulled up on our driveway. It was a typical Southern California winter day, the kind of day when December gets confused with August, and you end up wearing shorts and a tank-top, with a decorated Christmas tree in your living room.

I had just opened the garage door, leaning down to clip the leash onto Cookie’s collar, when I saw the man. A short, dark-haired male with tattooed biceps stepped down from one of those cranked-up trucks with oversized tires. Cookie hurled her body towards his ankles, and I managed to reel her in on the retractable leash, inches before she could nip at his sneakers.

“Are you Spencer’s mom?” the man asked, angling his neck upwards, so we could make eye contact. This did not feel like the start of a pleasant conversation and I debated whether to say, “No,” just to get rid of him, or at least postpone the rest of the conversation until Duke returned from Home Depot.

“Your son broke into my house at 2 a.m., on Christmas Eve to see my daughter.”

Posted by Jennifer Fink at 9:35 AM