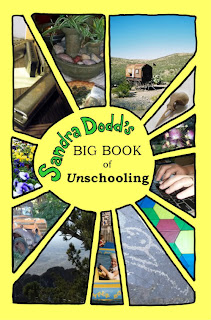 Sandra Dodd's son, Marty, is right: her Big Book of Unschooling makes an excellent bathroom book. Broken down into small, manageable bits, Sanda Dodd's Big Book of Unschooling is inspiration waiting for action. It's accessible, welcoming -- and the perfect anti-dote for parental self-doubt. Her common sense words help you let go and trust and enable you to enhance your sons' lives in ways you may never have imagined.
Here, a conversation with Sandra Dodd.

Unschooling is arranging for natural learning to take place.

Why did you write Sandra Dodd's Big Book of Unschooling?
I had been planning a book, but it wasn't time. Then two requests came in the same season of late 2008. An unschooling mom in India, Hema Bharadwaj, asked me a if I could put my website into book form. I said it wasn't possible. In San Diego, Flo Gascon was organizing the Good Vibrations Unschooling Conference and asked whether she could offer my first book as a pre-order, for her attendees. I figured most of her attendees already had my book, Moving a Puddle. So I offered to do a new book.
Moving a Puddle came out in 2006, and is a collection of most of my published articles from the dozen years before that, from the time my oldest was nine and I was writing for a regional parenting newsletter in New Mexico. Although I was involved in discussions of unschooling throughout the years, and spoke at many conferences, I didn't feel it right to write a strong "how to" unschooling book before I knew for certain that my children wouldn't decide to go to school, and I wanted to wait to see how they were as adults, to make sure I knew what I was talking about. In the time they were growing up, I knew more and more people who had also unschooled into their teens and young adulthood, so while I was working toward the time I would feel we had "successfully completed" unschooling our children, I saw and knew many other families in those later stages of unschooling as well. The more I saw, the more persuaded I was that the longterm effects of unschooling are beyond anything any of us expected or predicted.

Is the book only for homeschoolers -- or will other parents find it useful as well?
There are ideas any parents could use to help their families feel closer, I suppose, but it will be most helpful to unschooling families.
You have 3 children, including 2 completely unschooled boys. How/why do you think unschooling is beneficial for boys?
Many men work around their childhood shame and trauma, or take years untangling and overcoming it. Some men live with it every day, thinking it's just a natural part of everyone's life. Some are timid; some are bullies If their parents could have planned ahead to avoid shame and trauma, how much calmer and creative and courageous might their sons have been? There are inevitable sorrows enough without parents creating them. There are obstacles enough in life without parents setting them purposely or carelessly. Young men who will thank their mothers and hug their dads and who want to come home when they have the option do not come from harsh, traditional, punitive parenting. If their mothers have been their allies and supporters rather than their owners and bosses, life is different. If their fathers have been their counsellors and partners rather than their trainers and overseers, those boys can grow up whole, in peace and confidence.

What one message would you like parents of boys to take home from your book?
Your baby boys aren't future people. They are now who they will be at thirty and forty. You can't change them fundamentally, but you can help them grow nurtured and undamaged.

Sandra Dodd once taught in the public schools in her home town of Española, New Mexico. Thirty years ago she took up with Keith Dodd, from Alamogordo, they frolicked in history and music and costumes and friends, settled in Albuquerque, and spawned three singing, dress-up kids who grew into three creative adults frolicking in the whole wide world. Documentation can be found here: http://www.sandradodd.com/ and http://sandradodd.blogspot.com/

The book can be purchased from Sandra's website for $25 plus postage. Books are mailed within two days (sometimes within a few hours), by priority mail. Eventually it will be available from Amazon.com, but for now quick and direct is your only option. In the first two weeks, books have been shipped all over the U.S. and Canada, to Scotland, England, Wales, Denmark, The Netherlands, Switzerland, South Africa, New Zealand, Australia and India.
Posted by Jennifer Fink at 6:19 PM