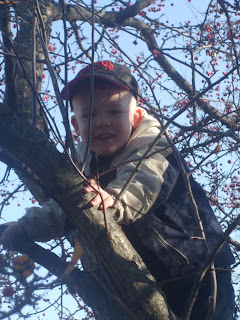 Ever notice how your boys frequently make their biggest leaps when you're not looking?
As you can probably tell, my three-year-old has learned to climb trees. And he did it all on his own.
He was outside playing while the rest of us finished lunch. The older boys heard some loud singing from outside and popped to the window to see what Boy #4 was doing. They found him in the tree.
He's wanted to climb trees ever since he realized there were trees to climb -- a side effect of having three older brothers. But we have long had a tree-climbing rule around here, which is: If you're too small to get up in the tree by yourself, you're too small to climb.
Well, Boy #4 found his way around that one. 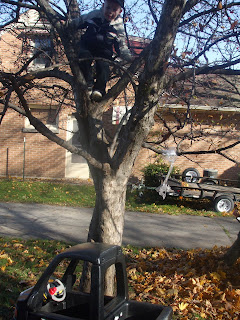 All of his own, he figured out how to use the materials in his environment to accomplish his goals. It's almost as if he needed the time, space and freedom to figure things out on his own.
Boy #3 did something similar when he learned to ride his bike. You know how most parents run along behind their child, helping support the bike, while the child learns to find his balance? Boy #3 learned to ride a two-wheeled bike in a parking lot. At a friends' house. While I was inside talking to the other Mom.
Granted, his Dad had been gradually bending his training wheels up for a period of weeks. Little by little, and without even knowing it, Boy #3 was learning to balance. But the final moment of truth -- learning to ride a two-wheeler -- came when we weren't even looking.
The November/December issue of Home Education Magazine touches on this very issue. In her article, "Hey. Just Play," author Rebecca Rupp refers to a new book, Falling for Science, a collection of short essays by past MIT students, reflecting on what drew them to science in the first place. Almost inevitably, she says, "future scientists and engineers all got hooked while messing around -- unsupervised -- with soap bubbles, mud pies, marbles, straws, Erector sets, and Lego blocks."
As parents, we spend hours every day protecting and nuturing our children. Perhaps the best thing we can do, though, is give them the freedom to climb.
Posted by Jennifer Fink at 9:02 PM