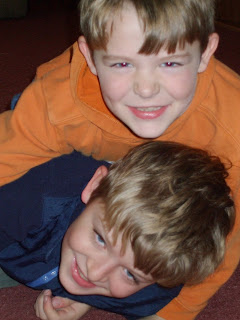 My boys (ages 3,5, 8 and 11) fight constantly. Don't believe me? Check out this excerpt from my article in the January - February issue of Home Education Magazine:
"Battles are part of our daily existence. Some are imaginative recreations of light saber battles or elaborate pirate swordfights. Others are purely physical explosions of energy (think wrestling on the living room floor). Still others are verbal, the natural tendency of boys to one-up each other. Whether it's handstands of fishing, countning or singing, whatever one of our boys can do, another claims he can do it better. Then, of course, there are the disagreements: Who gets to use the computer first. What channel to watch on TV. Whose turn it is to feed the cats."
My husband reassures me that fighting is a perfectly normal part of being a boy, but I just don't get it. I, of course, am a woman. I've never felt the need to tackle someone, just because he was nearby. And so I worried. After all, I want my boys to grow up to be productive members of society, and productive members of society don't wrestle each other at the first sign of a disagreement.
Then I read Why Gender Matters, a ground-breaking book by Dr. Leonard Sax. Boys, he writes, fight a lot -- in fact, boys fight 20 times more than girls, according to one psychologist who spent a year observing elementary schoolchildren at playgrounds. But the fighting doesn't seem to be destructive. The same psychologist found that boys who fight each other usually end up being better friends after the fight.
It turns out that human boys are not the only young mammals with a proclivity toward physical violence. Primatologists (scientists who study apes and monkeys) have long known that young male primates are far more likely to fight than young females. Some of this tendency towards physical aggression appears to be training for adults roles; among primates, males are far more likely to hunt and kill prey than females.
But it seems the aggression is also an important part of socialization, at least for males. "Wrestling and fighting with other males teaches them the rules of the game," writes Dr. Sax. "If young male primates are deprived of the opportunity to fight with other males, those males grow up to be more violent as adults, not less."
Looks like there's some hope for my boys after all.
Posted by Jennifer Fink at 9:07 AM