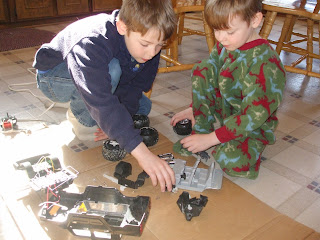 "The opposite of war isn't peace; it's creation."
-- La Vie Boheme, from the musical Rent

Yesterday my husband ran over a remote for a remote-controlled car. The case was cracked open just enough that the boys could see the chip inside -- and they were inspired.

(Apparently, they overestimate my husband's electrical abilities by just a little.)

Today, the remote was gone, but Son #3 correctly surmised that without a remote, the car is just a car. He asked if we could take it apart.

We've taken things apart before and had a ball. Last fall, we had a collection of broken things we dissected: an old popcorn popper, a hand-held vaccuum and a vaporizer. We'd been reading about motors, so it was fascinating for the boys to discover the mini-motors inside. And of course, they relish the chance to smash apart just about anything.

In the current issue of Home Education Magazine, Nancy Walters has a great article called "Nurturing Destructive Tendencies." Walters did a similar activity with her homeschool group, unloading a bunch of broken appliances and setting the kids loose with screwdrivers and other tools.

But while boys enjoy destruction for destruction's sake (c'mon -- it IS kind of cool to see how things fly apart when you whack them with a hammer!), the true learning I saw this morning involved CREATION.

Sons #2 and 3 hunched over the pile of parts, eyes alert, looking for anything they might use to make something else. Son #3 was rescuing the seats and wheels, to use to craft another car. Son #2 ran off and got the motor he'd saved from the vaporizer.

The motor didn't work while in the vaporizer; years of mineral build up prevented it from turning freely. Once we had it apart, though, we discovered that it still worked.

So today, Son #2 rummaged through the pile of plastic parts, combined pieces from the RC car with the vaporizer motor and experimented with lift and flight. He managed to attach a blade to the top of the motor that, he said, was almost powerful enough to lift it into the air.

This was the child who spent yesterday moping around the house, moaning that "there's nothing to do." Today, with a pile of junk in front of him, his eyes were glowing with curiosity and connection.

The car, BTW, was one that Son #3 received as a Christmas present. Not even six months ago.

Besides, the fun we had with it today was worth way more than the original $12 pricetag.
Posted by Jennifer Fink at 1:35 PM