Do Boys Start Too Early? 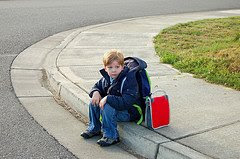 Over on Why Boys Fail, author Richard Whitmire has an intriguing link about England's "pushback" against earlier schooling for boys.

Note that phrase: "formal instruction." No one is saying that young boys can't learn. They can, and they should. But learning in a four-walls environment with desks and worksheets is very different from learning in the real world, and boys (especially young boys) thrive on real world learning.

They like -- need -- to get their hands dirty. To experiment for themselves. To create games and chaos. To run around pretending they are knights or Jedi. To wander through a stream, searching for minnows, crayfish and waterbugs. To stare at a wall for hours.

That's the kind of education young boys need, and the kind they are NOT getting in school.

Putting boys in school at ever-younger ages won't solve boys' educational problems. Letting them live in the world -- as the boys they are -- just might.
Posted by Jennifer Fink at 1:15 PM