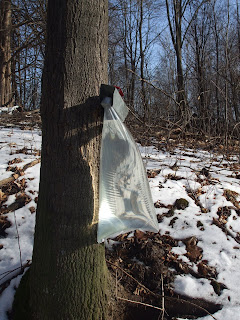 This, my friends, is the start of maple syrup.

That clear liquid is maple sap, a natural delicacy if ever there was one. Did you know that maple syrup is a good source of maganese and zinc? And that maple trees can be tapped repeatedly, for years and years and years?
My husband grew up tapping trees. On the hill behind his house was a stand of maples, and each spring, he and his father would tap the trees and boil the sap into syrup.
Now my husband taps those same trees with his sons, and we all look forward to maple syrup season as the first real, true sign of Spring.
Around here, we usually tap the trees sometime in March. The exact timing varies from year to year; the weather has to be just right, meaning below-freezing temps at night and above-freezing temperatures during the day.
(Quick science lesson: the sap is stored energy for the tree. As winter ends, the sap, a sugary substance, begins to flow up the tree, feeding the buds and preparing the tree to bloom. The below-freezing night temps cause the sap to drop back down the tree, while the above-freezing daytime temps encourage the sap to rise up the tree.)
We tap the trees with either an electric drill (the faster way) or an old-fashioned hand brace, which is basically a hand-powered drill. You know you've gone far enough when the hole begins to drip. Then we pound in the taps, using a hammer -- and the kids enjoy the sap! 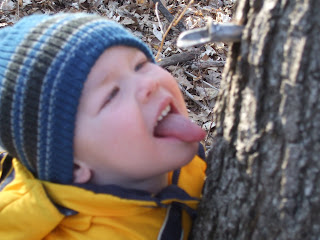 The sap is perfectly clear, cool and sweet. At this stage, it's mostly water, but you can still taste the sugary sweetness!
Generally, we put in about 100 taps a season (not counting the 4 we do in our own city backyard, just for fun). At home, we hang buckets on the trees, but out in the country, we use heavy-duty, covered plastic bags.
Then we wait. How much sap we collect and how quickly it drips is entirely a function of the weather. So far, this has been a good year. Two days ago we collected about 150 gallons of sap, and today we collected at least that much again. 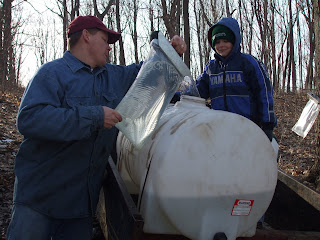 (Quick question: How much syrup will that make? Hint: It takes 40 gallons of sap to make 1 gallon of maple syrup.)
Then it's time to cook the sap down. We cook ours the old-fashioned way, in a large flat pan over a wood fire. It's a lot of work -- trees must be cut down (to fuel the fire) and once the fire is going, it needs to be almost constant attention. Thankfully, my husband's cousin mans the night shift!
As the sap heats, it becomes more concentrated. Sap is mostly water, so when it's heated, the water evaporates, leaving behind the sugar. Eventually the sap becomes dark, thick and oh-so-yummy maple syrup!
Of course, cooking it down a little more will give you maple candy, and THAT'S pretty good too!
Posted by Jennifer Fink at 1:36 PM