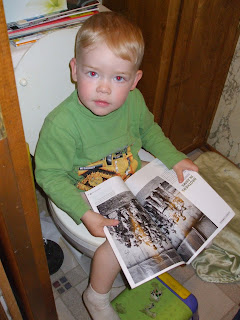 Four boys into parenting, I'm convinced that you can't teach a child to go on the potty. Of course, if you've been around awhile, you probably already know that I don't think you can teach a child anything.

You can facilitate a child's learning. You can provide materials and answer questions. You can even show him how something is done. But to say you can teach him something -- which many people seem to define as getting a child to do what you want him to do, when you want him to do it -- seems to ignore the basic fact that the child is part of the equation as well.

I can throw all the information and knowledge in the world at a kid, but if he's not developmentally, emotionally, cognitively or physically ready to receive it, he's not going to "learn" a darn thing.

Which brings me to potty training.

But none of them, my friend, can tell you how to potty train your son.

I'd like to tell you that I have potty training boys all figured out. And if I'd stopped at Boy #3, I could make a pretty good case for it. After all, Boy #3 was completely trained -- day and night -- before he was two years old.

Fortunately, by Boy #3, I was already experienced enough in the ways of boys to know that his success had absolutely nothing to do with me. When, at the age of one-and-a-half, he showed an interest in sitting on the potty, my first instinct was, No, I am not doing this now. My oldest son had shown an early interest in potty training -- which fizzled out after we pushed too hard and turned into a three year battle of the wills. I waited longer with Boy #2 and had better results. I did not plan to start down that disastrous road again.

But what are you going to do when your eighteen-month old son asks to sit on the potty? Say no? Of course not. So I let him try. He peed. And that was about the end of that.

Boy #4, on the other hand, turns three-and-a-half this week. He's not yet potty trained. He can pee on the potty, and will on occassion, but generally speaking, he's not interested, and that's quite OK with me.

According to the American Academy of Pediatrics, most boys (and girls) are daytime potty trained between the ages of three and four. (Which, for the record, clearly means that some are not.) After age five, most girls and 75% of the boys stay dry at night.

Not surprising, really, when you consider that boys' brains mature at a different rate than girls'. And when you consider individual variation -- which the books and experts never seem to address -- it's not surprising that Boy #3 was potty trained early while Boy #4 is still working on it. Boy #3 has always and forever mastered physical skills at an early age. He walked early, ran early and learned to ride a training wheel-less bike by age four. Boy #4, on the other hand, has always been a little late as far as physical milestones. They're both on track -- just different people.

So throw away the books and forget about the experts. Look at your son and follow his cues. He'll teach you everything you need to know.

What do you think? Can potty training be taught? What worked for you and your sons?
Posted by Jennifer Fink at 5:02 PM