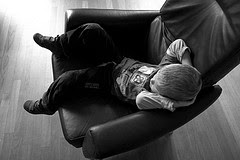 I'll admit it: although my boys love building with blocks, sculpting playdough and riding bikes outside, I'm one of the parents who pushed the "video games/computers" button over there on the left. And if TV was an option -- yeah, I'll admit that's one of their favorites too.
Now, a new report comes out linking TV viewing with depression. The link doesn't seem to be what I initially suspected -- that depressed teens simply watch more TV -- but rather that kids who watch more TV are more likely to be depressed a few years down the road. Of course, that's not saying that TV causes depression, but it's another log on the "TV-is-bad-for-your-boys" fire.
The negative effects of TV have been reported over and over. TV violence may spur violent boys. TV causes/contributes to obesity. TV exposes children to things they don't need to see. TV takes aways boys' imagination.
For another perspective, though, read Sandra Dodd. My Son #2, an avid TV watcher if ever there was one, fully agrees with "Everything I Really Needed to Know I Learned from Video Games and Cheesy Cartoons." It's amazing, really, how many things he's picked up from the TV. This past Christmas, he and Son #3 were both humming The Nutcracker March -- courtesy of Tom and Jerry. He's amazed me with interesting facts and vocabulary words that should be far beyond the reach of an eight-year-old. And every time I express surprise, he just looks at me, grins and says....
"Who says you can't learn anything from TV?"
Posted by Jennifer Fink at 12:47 PM