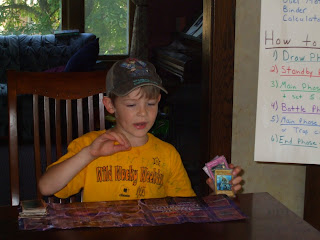 My boys have rediscovered their YuGiOh cards.
For those of you who are unfamiliar with YuGiOh, it's a trading card game, kind of like Pokemon. Each card has a character with attack and defense points, or else is a spell or trap card that can inhibit or enhance the character cards. Players "duel" each other and the object of the game is to win by taking your opponent's life points down to zero.
Personally, I'm glad I could explain that much to you! The game is COMPLEX, and my boys (even my five-year-old) play it way better than I do.
My second son (pictured) is the one who got us into the game. He's always been a collector, and after he saw a friend's cards, he started collecting Yu-Gi-Oh. That led to a world of discovery: YuGiOh books and movies from the library. A YuGiOh computer game. And so, so much more.
Their dad collects football cards, so the boys are well-aware that cards have value.
They spent hours pouring over online sites such as this, researching the value of their cards and inadvertently improving their computer, math, typing, spelling, reading and writing skills. One son would meticulously type in the names of his cards, letter-by-letter, and then record their value on a sheet of paper. All of them mentally tallied life points every time they dueled.
Money skills were involved as well, as each child had to save up and make his own decisions about which packs of cards to buy when. YuGiOh also enhanced their social skills. The boys connected with other boys who played YuGiOh and dueled as often as possible.
But they wanted more; they wanted to enter a REAL YuGiOh tournament! So they went online and researched options. Turns out, a hobby shop half an hour away hosts a tournament every weekend.
We went, and it was WONDERFUL! There's nothing better than seeing a room full of boys (and some girls) of all ages -- ranging from my five-year-old to fathers in their 40s -- actively involved and having fun. These kids were animated. They were excited. They were intense. And I couldn't help wondering -- how many of these boys feel like losers at school? How many of these boys are labeled "slow," "destructive," or "unmotivated?" Because in that room, all I saw was opportunity.
Sometimes, all it takes is the right spark to light a boy's mind on fire. And if that spark comes in the form of a multi-colored trading card, I'm all for it.
Posted by Jennifer Fink at 12:05 PM