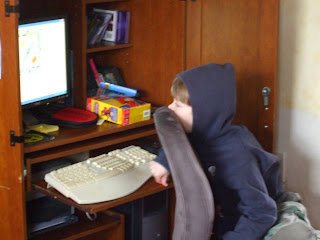 A lot of people would bemoan this result. After all, video games and computers have been blamed for everything from increased child obesity to shortened attention spans to a lack of connection to the outside world.

I'll be the first to admit that I, too, have worried about the amount of time my boys spend playing video and computer games. But whenever I worry, I look at the big picture and see that my boys are doing fine. They ARE connected with nature. They DO go outside to play. They're active and fit and connected with the world around them.

So now, I consider computer and video games just another learning tool. That doesn't mean that the boys only play explicitly educational video games; it means that I've opened my mind to see what they are learning and accomplishing with every game they play. Sometimes it's facts or information; other times, it's stategy and critical thinking. Sometimes, it's fun and entertainment.

Favorite games in our house right now include Command and Conquer, a long, long, LONG time favorite (they just keep coming back to this one!) and Lego Star Wars: The Complete Saga for Wii.

What are some of the favorite games in your house, and what do you see your boys learning from video and computer games?
Posted by Jennifer Fink at 12:05 PM