Q and A with a Video Game Designer 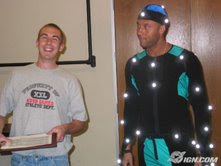 What was your first video game system?

The Atari 2600 was where it all began for me. In fact, I still remember the day we got it. It was Christmas and I was probably about 5 or so (I’m now age 31). My dad got it from somewhere and I remember it coming with the games “Air Sea Battle” and “Combat” among others. I’m not kidding when I say this may be the oldest memory I still retain. Shortly after we got the Atari 2600 I remember my father buying a Colecovision off of a family friend (along with several games).

The first system I can say I actually helped buy with my OWN money was the original 8-bit Nintendo. That was back around 1988 or so when I was 10 years old. The original NES (Nintendo Entertainment System) cost $100 back then and I was so determined to get one, I saved up $70, my brother Tom kicked in $25, and my sister MaryBeth gave $5. One of the best purchases I’ve ever made. I still have all 3 of those systems….and they all still work. I now own more than a dozen gaming consoles.

How many hours a day did you play video games when you were a kid?

A LOT! It’s hard to put an exact number on it. I definitely had more time to play during the summer as a kid than I did during the school year but I bet I averaged a couple hours a day.

It was not uncommon back then for me to get what I called “Nintendo thumb.” “Nintendo Thumb” is when I played so long that I would literally have an imprint of a button left in my right thumb after hours of playing (and my thumb would be really sore.) “Super Mario Bros. 3” was responsible for giving me “Nintendo thumb” more than any other game.

That said, for as much as I played (and continue to play), I was always very conscious not to let games dominate my life too much. I played a lot of sports outdoors growing up as well.

How did your background in video games lead you to your current job?

I’m a little bit of an oddity in that almost every person I work with (about 90 – 95%) went to college with the idea of getting a job in the video game industry. They either studied computer science and became programmers or studied computer art applications and became artists. Some even went to schools with programs specifically catered towards video gaming degrees! I researched some of these schools but found them all to be way too expensive.

I was really one of the lucky ones. I saw a job posting on a web site about 5 years ago for a company that made sports video games looking for a designer. I’d never designed a video game before and had no formal training, but applied anyways since I felt like a lifetime of playing games prepared me well for such a role.

Fortunate enough to get the job, I soon realized that, while I had a LOT to learn about the actual process of making games, the foundation of my knowledge was strong. From day one, I felt I knew more about game design than anyone else there, because I didn’t just “play” games -- as I got older I got to understand them. I would try to figure them out a bit, find out how they worked, find out what they did to make the game fun or accessible.

Before I got that job, I’d actually started writing video game reviews for a now defunct website online for free. They’d send me free, burnt copies of games. I’d play them for several hours and write up a review. Being exposed to so many different types of games helped me to see common design practices games would use, everything from how they’d structure a game to how they’d design their menu screens. Reviewing games made me ask what was good about each game and what was bad. It made me think about what I’d do to improve the game and so forth. Doing this for several months greatly improved my ability to study a game, not just play it.

What’s it like to work in the development of video games? What is your job like on a day to day basis?

The biggest misconception about making games for a living is that the only thing we do all day is simply kick our feet up and play games. Nothing could be further from the truth. Making video games is a LOT of work, and nothing about this job is ever easy. It is not uncommon for people within this industry to regularly put in 50 – 60 hour work weeks – and sometimes more in the final months leading up to the game’s release.

A typical work day at Zindagi Games runs from about 9:00 am to 7:00 pm. We get off an hour for lunch and have off every other Friday (this work schedule of having off every other Friday is totally unheard of in the gaming industry….I’m very fortunate). However, I typical work longer hours than most as I usually get into the office around 8:00 A.M. and leave around 8:00 P.M. The more experience and responsibility you take on as you grow with a company, the longer your hours typically become.

In my current role as game designer / producer, I’m responsible for the entire design of the game, as well as creating everyone’s schedule (their “task lists” as we call it) in order to ensure the game gets built as intended -- both on time and on budget.

To do this, I must coordinate the efforts of an entire company. Zindagi Games has more than 50 employees and so one of the most important aspects of my job is ensuring that everyone is working towards a common goal and vision. Communication is vital. Everyone involved must understand what needs to be done in order to get the game built as intended.

Another part of my job is working with our publisher. I have several conference calls a week in which I must update our publishers on the current status of our game. If there are problems or issues that arise, they help us find solutions. This could come in the form of extending our contract to allow us more time to polish our product or providing us with necessary resources.

What are some of the perks of being a video game designer?

Seeing others playing and enjoying the game YOU worked on is an immensely satisfying feeling. Seeing the product you worked on in stores like Target and Wal-mart is very cool.

The perks of the job are great as well! We do, in fact, buy a lot of video games from the local video game store for us to research. (Checking out competing projects is an essential part of our job to ensure we are keeping up with the Joneses). As employees, we’re free to take these games home at night to play them in our free time, which is outstanding.

We also get to attend select video game trade shows and conventions not open to the public. Ever heard of an event called “E3?” (Electronic Entertainment Expo). For years this has been THE event for all things video games exclusive to people within the industry.

Lastly, depending on the game you’re working on, you might even wind up meeting some celebrities. Having worked on a Major League Baseball title for several years, I was fortunate enough to get a chance to meet with our “cover athlete,” Derek Jeter of the New York Yankees as well as Hall of Fame second baseman Joe Morgan, who did some of the commentary in our game. A lot of other video games use Hollywood actors to voice certain characters in their games.

Oh, I’d also be remiss if I didn’t mention one more job perk: NO DRESS CODE!!! This is huge for me since I hate dressing up and feeling like a corporate shill. I show up for work everyday in a T-shirt and shorts. It’s a very casual work environment and I wouldn’t have it any other way.

What do you suggest for boys who may be interested in a career in the video gaming industry?

Learn all you can about games. Learn about the different genres and different gaming systems. Learn about their differences and similarities. If you’re young, that means reading about games online (try IGN.com or Gamespot.com) or in magazines. Watch the channel “G4” on cable TV. Play a wide variety of games and see what kinds you like best. Talk about them with friends. Write reviews in a local school or city newspaper (if they are willing to accept them).

If you’re old enough and are interested in a career in the video gaming industry my best advice would be to contact someone who works in the industry and find out what it is they exactly do. Job shadow. See if you can spend a few hours at work with someone to see what their life is like on a day to day basis. There are a lot of different jobs within the video game industry (everything from programming, designing, artwork, sound, managing, marketing, quality assurance testing, you name it) that it would be good do some research into finding out what each person’s job entails and see if that’s something you could see yourself doing.

For those just coming of working age, working in a local video game store or electronics department is a good step. Doing that, you really get a sense of what the public is buying (which is critical knowledge if interested in making games you hope will actually sell).

Applying as a game tester at a local video game studio would be a good step for those of age that live close by a game studio. You’ll learn a ton about the development process working in such a job.

Lastly, I just want to say that having a passion for games (and for making games) is more important than anything else. I work with a lot of extremely intelligent individuals (people that have gotten perfect scores on their SATs, for example), but intelligence alone doesn’t make you good at your job. Above all else, having a passion and drive to make games can take you as far as you’re willing to go.

Having a strong work ethic and can-do attitude is way more important than just being smart and capable. I can tell you first hand that the most important aspect to a game company, when looking for individuals to hire, is to find someone who is willing to shoulder a part of the workload, to help the company rather than just punch a clock.

Have any more questions for Greg? Next week, he'll talk about video games and learning -- and answer any other questions you may have.

Posted by Jennifer Fink at 2:30 PM

Email ThisBlogThis!Share to TwitterShare to FacebookShare to Pinterest
Labels: careers, learning, Q and A, video games